I’ve illustrated the coronavirus spike protein a lot over the last few years, including its mutations. In the process, I made many decisions about how to show mutations, and want to share my rationale.

First, it’s important to review how we describe mutations – they’re identified in reference to an original, unmutated reference sequence. So, for example:

This is also consistent with how we think about mutation. We want to know – where are the changes on this variant’s spike, relative to the original virus? This was especially salient prior to the development of updated boosters, because the vaccines were all based on the original virus’ spike, and the mutations’ locations give scientists clues about how variants might evade immunity to the original spike.

If these had been very detailed illustrations for researchers, I would have used both the original and mutated structure, and shown them in comparison. However my goals were to communicate to an interested and educated lay audience – the readers of Science News & Scientific American.

In my Science News illustration, I highlighted just one copy of the three S protein copies that make up one whole spike protein. This was because we were labeling each mutation, and annotating with their theorized functional impact. The mutations could be more easily illustrated in the accompanying 2D depiction of the viral life cycle.

However, in the Scientific American illustration of Omicron, I highlighted the mutations in all three copies of the S protein. The graphic wasn’t going into individual detail on the mutations, just showing the striking density of mutation in the RBD and NTD regions.

There were countless other subjective decisions made for each of these (color, conformation, surface contouring, ribbon diagram or not, glycans or not, etc.) As always, medical illustration is both a science and an art! 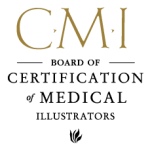